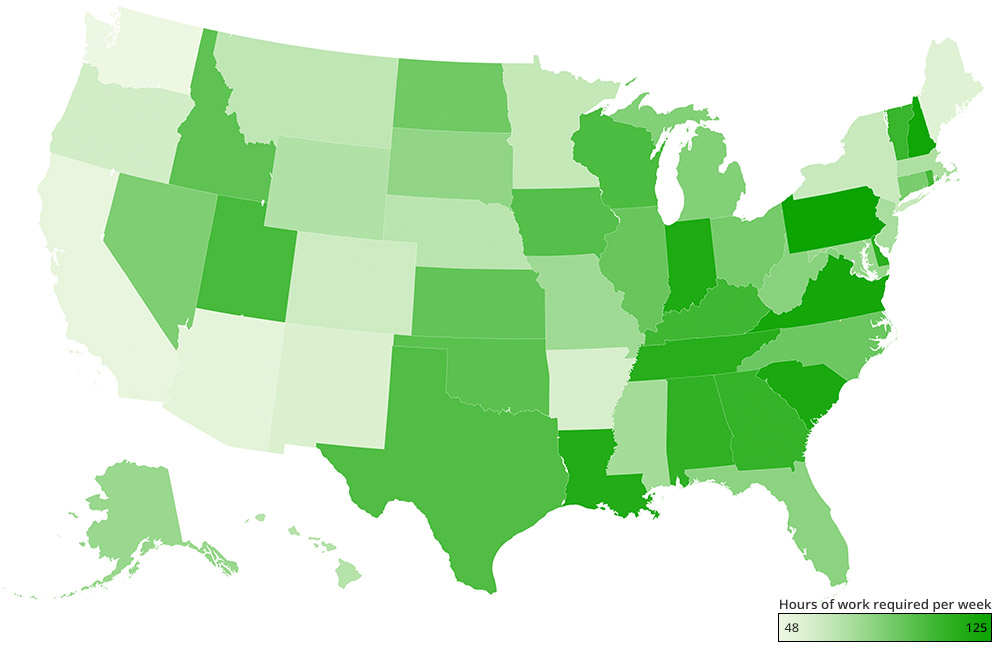 Choosing a college is one of the most important decisions you make in life. Your choice influences everything from the friends you make, to the career path you choose and, often, where you live after you graduate.

Perhaps most importantly, it will determine how much money you spend over the next four years of your life and how much loan debt you will need to pay off once you enter into the real world. Adjusted for inflation, the cost (tuition and housing) of attending a public, four-year school has increased by 178% over the last 40 years, so chances are you’ll have at least a little bit of debt.

But you can get a job and pay your way through school, right? We’ve all had an older relative tell us this at one point or another. They did it back in their day, so you can too!

Coming out of school debt-free sounds great, so for the second year in a row, we at TextbookRush decided to dive in and take a closer look at how to do it.

Can you really still pay your way through college?

To start, we looked at whether or not our relatives were telling us the truth. Turns out, they were. For example, despite a minimum wage of only $2.00/hour at the time, a student attending college beginning in 1974 could have paid for their tuition and housing by working a part-time job for approximately 27.5 hours per week. Add in 12 hours a week to that schedule for courses and you get a full-time job. It’s not the easiest schedule, but it’s certainly manageable.

Unfortunately, it’s not so easy these days. In fact, it’s really, really difficult. Here’s a quick overview of the 10 hardest states to pay your way through college:

Surprised? You might expect to see states with high tuition costs like Vermont and Rhode Island up at the top, but a student’s ability to pay for their education depends on more than just the cost of that education; how much money they are able to make is also an important factor.

Keep reading to learn more about how we did the math and why it’s becoming so difficult for students to cover their costs as they go.

Nothing feels better than walking out of your graduation ceremony with a shiny new degree and no debt. Ideally, hard work and dedication would be the key to both. But since not all states are created equally, we determined exactly how much a student in each state would need to work in order to pay for their tuition and housing, leveraging publicly available data from the NCSL and College Tuition Compare. Here are the criteria we considered:

After determining the key metrics for each state, we calculated the number of hours per week a student would have to work to pay for tuition and housing using the following formula:

A few important notes on minimum wage before we continue:

With all the disclaimers out of the way, read on to see how much students have to work to pay for school. At the bottom is a breakdown of every state, including figures for in-state and out-of-state students. And since virtual learning has become a popular trend thanks to COVID-19, we’ve updated our calculator to help you see just how much easier it is to pay your way through college if you’re living at home and saving on housing costs this year.

Ah, Pennsylvania. With the second highest in-state tuition in the country and the lowest minimum wage allowable by federal law, it’s no surprise they ended up number one on our list for the second straight year (and not in a good way). Students brave enough to try to pay for their tuition and housing in the Keystone State will have to work the equivalent of three full-time jobs on top of their schoolwork to break even, a total that went up nearly 5% compared to 2019.

Different state, same problem. While the state did have lower average in-state tuition costs, an increase in housing costs and a stagnant minimum wage lay the groundwork for a tough life if you’re a student paying your way through school in New Hampshire. On the bright side, you do get seven hours back each week compared to Pennsylvania students. We’d recommend using those hours to sleep.

One of the most historic states in the country, Virginia has plenty of great schools to offer potential students. Too bad it’ll be impossible to come out of school debt-free without a scholarship or other outside help. Things are looking better than our top two, but “better” relative to “terrible” is still not a good place to be.

South Carolina has a lot to offer potential students. From historic cities and battlegrounds to warm beaches and great shopping in places like Charleston, there’s something here for everyone. Unfortunately, the state falls short for students whose wallets are a bit tight. We don’t know about you, but 99 hours a week seems like a bit too much in our humble opinion.

Indiana is the first state on our list to drop a position compared to last year, but that isn’t necessarily a good thing. Tuition and housing costs still increased while minimum wage remained unchanged. The only reason for the drop was a larger cost increase in South Carolina, so we wouldn’t call this a win. Home of Purdue and Notre Dame, students here only have to work two and a half times that of a full-time employee to cover their tuition and housing costs. A small price to pay for no debt at graduation, said no one ever.

Rapper Lil Wayne, legendary jazz musician Louis Armstrong, and former American Idol judge Randy Jackson all call this state home. And while Louisiana is middle of the pack in terms of tuition costs, it’s the low minimum wage that does them in. Students here would need to work a staggering 94 hours a week to pay for their education. So, as Randy would say, “that’s gonna be a no from us, dawg.”

Tennessee actually lands right about in the middle when it comes to in-state tuition and on-campus housing costs. Logic would suggest that wouldn’t make it too difficult for a student to cover those costs, but in reality, it’s a good example of just how expensive college is these days. A $7.25 minimum wage doesn’t help either, leaving students here on the hook for around 92 hours a week if they want to pay their way and graduate debt-free, a four hour increase from last year.

Up to now, every state in the top 10 has been held back thanks to their low minimum wage. Delaware finally breaks this trend with a modest increase to $9.25/hour, which is actually an increase from 2019’s $8.75. Why, then, are they still in the top 10? At $9,161 a year, Delaware has the seventh highest in-state tuition in the country. On the bright side, however, this is the first state on our list to make is EASIER for students to pay for college, largely through flat housing costs and a $.0.50 minimum wage increase. Nearly 88 hours a week still isn’t realistic, but at least it’s a step in the right direction.

As it turns out, Alabama first introduced a state sales tax in 1937 to help fund education. Unfortunately, that hasn’t done much to lower the cost of higher education in 2020. You would need to work nearly 88 hours a week here to cover your tuition and housing, a three hour increase from last year. On the bright side, Alabama was the state that first introduced Mardi Gras to the western world, so that might help you forget about your debt for a day or so.

A newcomer to our list this year, Georgia knocks Kentucky out of our top 10 with year-over-year increases in both tuition and housing costs while keeping wages at the federal minimum of $7.25 per hour. All of that adds up to nearly 86 hours of work for college students to break even on their investment in this southern state.

So what have we learned? College is expensive, housing is more expensive, and minimum wage just can’t support a student trying to pay their way through school anymore (especially when 18 of the “top” 20 states on our list didn’t raise the minimum wage compared to 2019).

Right or wrong, college has become a significant financial investment that requires outside help from family, scholarships, or loans to help you pay. We highlighted tuition and housing costs since they account for most of the expenses, but students today also have to account for other costs in the form of parking passes, meal plans, and trying to buy textbooks each semester. While a college degree is valuable, it’s more important than ever to put a lot of thought into your career path and do your research when choosing a school. And if finances are a concern, try to sell textbooks back at the end of the semester to put some money back in your pocket.

And in case you’re wondering, yes, some states made paying your way through college a lot easier this year, largely through increases to the state minimum wage. Here’s a quick look at the top 5 and how many hours you would need to work.

While it still wouldn’t be completely realistic to pay your way through college in any of these states, we have to give them a shout out for moving the needle in the right direction.

Curious where your state landed? Check out the full rankings below to see how much you would need to work to pay your education bills. Need to pay out-of-state tuition or thinking about living off-campus or at home due to COVID-19? Head back to the top and try out our simple calculator.